Vincent & Flavia are currently not available for corporate bookings. However, if you would like to contact either Vincent or Flavia regarding availability, appearances, teaching, or other TV work, please contact:

Having danced together for the last 25 years, Vincent and Flavia have become one of the country's most successful Ballroom, Latin American and Argentine Tango performers and choreographers.

Their journey started as amateur ballroom and Latin American dancers and over a period of 10 years they competed in numerous national and international championships winning a host of titles including:

2007 saw them move away from competitions and join BBC's Strictly Come Dancing show as professional dancers.

Throughout the next 8 years of being on the show they had great success and captured the hearts of the nation with their own unique style of Argentine Tango.

Whilst on the show they both made the final on more than one occasion and have both won the Christmas and Children in need specials. Flavia went on to win the series with Louis Smith.

Since leaving the show in 2013 they have toured the U.K. extensively with several dance theatre productions achieving various accolades, including 2 Olivier Award nominations for family entertainment. They have not only starred in but also co-created & choreographed each show. Their first production in 2013 was Midnight Tango which toured the U.K. successfully for 3 years and had 2 west end runs, a dance musical based on the Argentine Tango in its Argentine setting. Over the next 4 years this was followed by Dance 'til Dawn, a musical dance around a comic murder-mystery plot. The Last Tango embraced many different dance genre, but with a plot filled with emotion and suspense that has enthralled their audiences in packed theatres across the country. and most recently Tango Moderno, touching upon today’s life and current music.

In 2018 they performed at the prestigious BBC Tango Proms And starred in Snow White at the London Palladium along side Dawn French and Julian Clary.

In 2019 Vincent is touring in the U.K. together with Ian Waite in ‘The Ballroom boys’ whilst Flavia is developing her own Dance, health and fitness website which will launch later in the year.

Their other tv work includes:

Sunday night at the London Palladium

Celebrity portrait of the year show amongst others 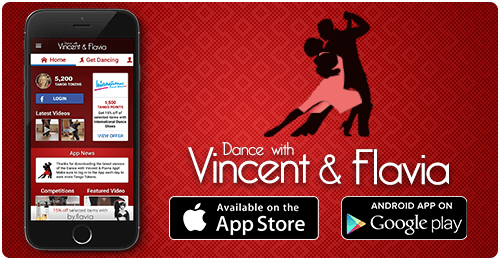